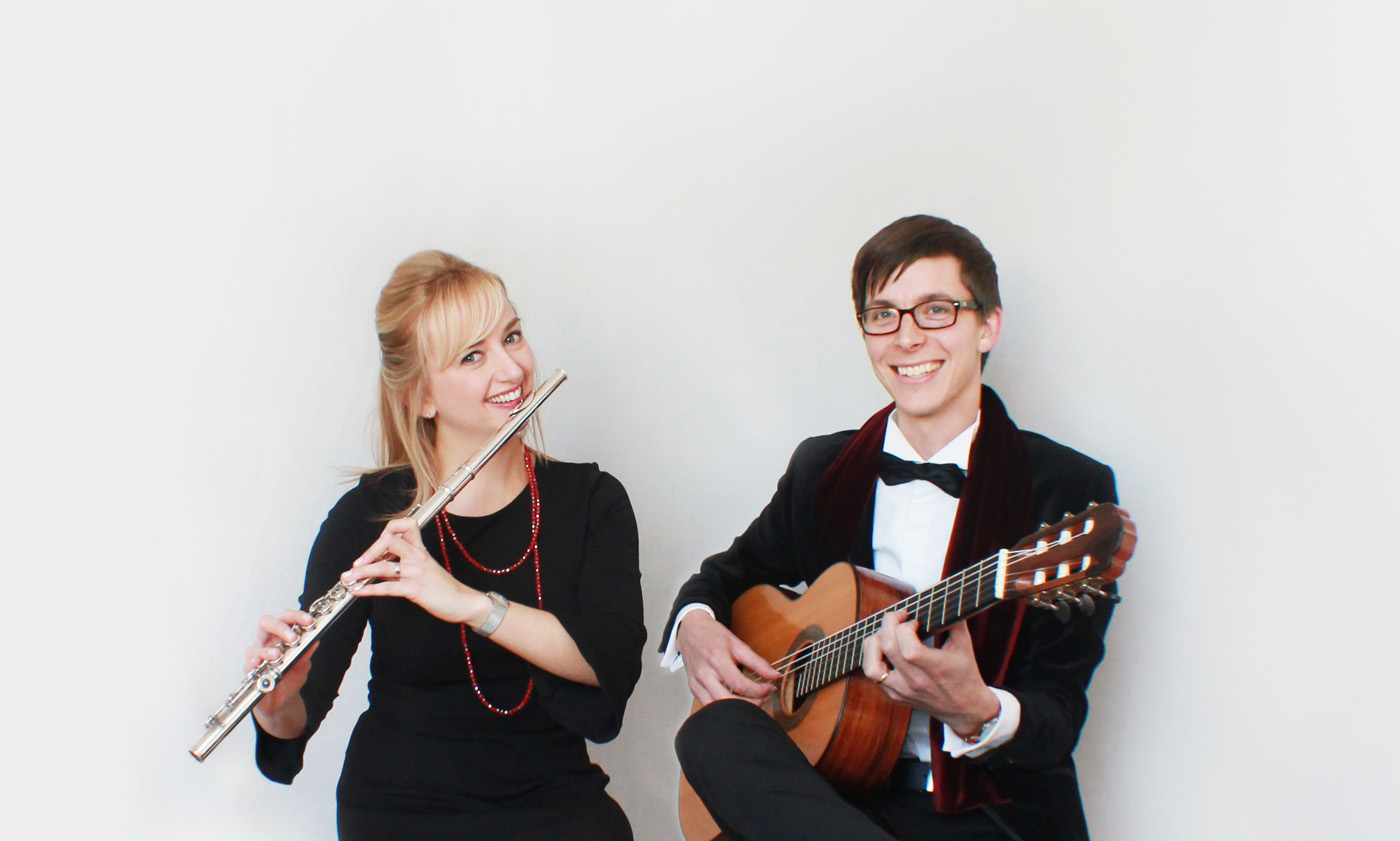 The Boyle Klöfver Duo is a dynamic and innovative flute and guitar ensemble. Formed in their student days at London’s Royal College of Music, Scottish flautist Kimberley Boyle and Swedish guitarist Nils Klöfver began performing together in 2009, giving concerts throughout the UK and abroad. They have a genuine interest in widening the repertoire for the ensemble both through close collaborations with composers as well as creating their own arrangements of classical pieces and traditional folk tunes. Through their Castle Concert Series they also take great interest in spreading chamber music, welcoming new audiences by clever programming and by hosting concerts in unconventional but easy accessible venues. In 2017 they released Passing Seasons to great critical acclaim, an album featuring their commissioned work by Scottish composer Eddie McGuire alongside a varied repertoire including Debussy’s much-loved Clair de Lune and the fiery tangos of Astor Piazzolla.

Kimberley was brought up in Perthshire, Scotland where she enjoyed music from an early age and began playing the flute at the age of 11.  She attended the Royal Scottish Academy of Music & Drama Junior Department and then in 2000 Kimberley moved to London to take up a place at the Royal College of Music – graduating in 2004 with First Class Honours.

Kimberley was then awarded scholarships from the Musicians Benevolent Fund, The Countess of Munster Musical Trust, Sir James Caird’s Travelling Scholarship and The Cross Trust, which enabled her to continue her studies at postgraduate level. Kimberley won some of the RCM’s most prestigious prizes, including the Senior Wind Prize, and achieved a Distinction in Orchestral Performance.

Since completing her studies, Kimberley has been based in London as a freelance musician and is also a dedicated teacher. Her performance work includes solo/chamber recital engagements and orchestral flute/piccolo playing.

Nils Klöfver is a prize-winning Swedish guitarist based in London. Active as a concerto soloist, solo recitalist and in various ensembles, he is enjoying a busy freelance career with engagements in recording studios as well as in concert halls.

Nils began learning the guitar aged 7 at Borlänge Musikskola and at the Musikkonservatoriet in Falun. In 2002 he moved to London to begin his studies with Gary Ryan and Carlos Bonell at the Royal College of Music. He graduated from the Bachelor of Music (Hons) course in 2006 with a 1st class degree. In the same year he also won first prize in the Royal College of Music Guitar Competition, made his debut at the Wigmore Hall and appeared as a finalist in the distinguished Jörgen Rörby competition in Sweden.

He has received scholarships from Musikaliska Akademien, the Cultural Council of the City of Borlänge and Sparbanks-stiftelsen. As well as performing on the standard classical guitar Nils also gives recitals on the alto guitar – an eleven-
string instrument merging together the best qualities from the renaissance lute with the modern guitar.

Nils has performed in major London venues such as the Wigmore Hall, St. Martin-in-the-Fields and Cadogan Hall, and frequently returns to Sweden, Spain, France and Germany for concerts. Outside of Europe his playing has taken him to Japan and North and South America.

Unique concerts in unique settings – that’s the cornerstone of the Castle Concert Series. By handpicking venues, careful programming of repertoire and well presented introductions to each piece, we create an intimate ambience where music and space come together, to give the audience an experience above the ordinary.

The internationally acclaimed Boyle Klöfver Duo started the series in 2014 and now returns to Scotland once again to their hugely successful and third season of Castle Concert Series. This is the third and biggest season yet for Castle Concert Series, with each previous season receiving a fantastic response from audience members and castle managers alike.

“The message is all in the titles and the music will carry the sense. However, the themes of the movements are all instinctively related and continual variation is going on, reflecting seasonal and emotional change.” Eddie McGuire

Listen to it on Spotify: spotify.com

Buy it on iTunes: itunes.apple.com

The Boyle Klöfver Duo’s EP recording “Improvisations on Calderon” is out now!

Click here to order your copy or listen on Spotify 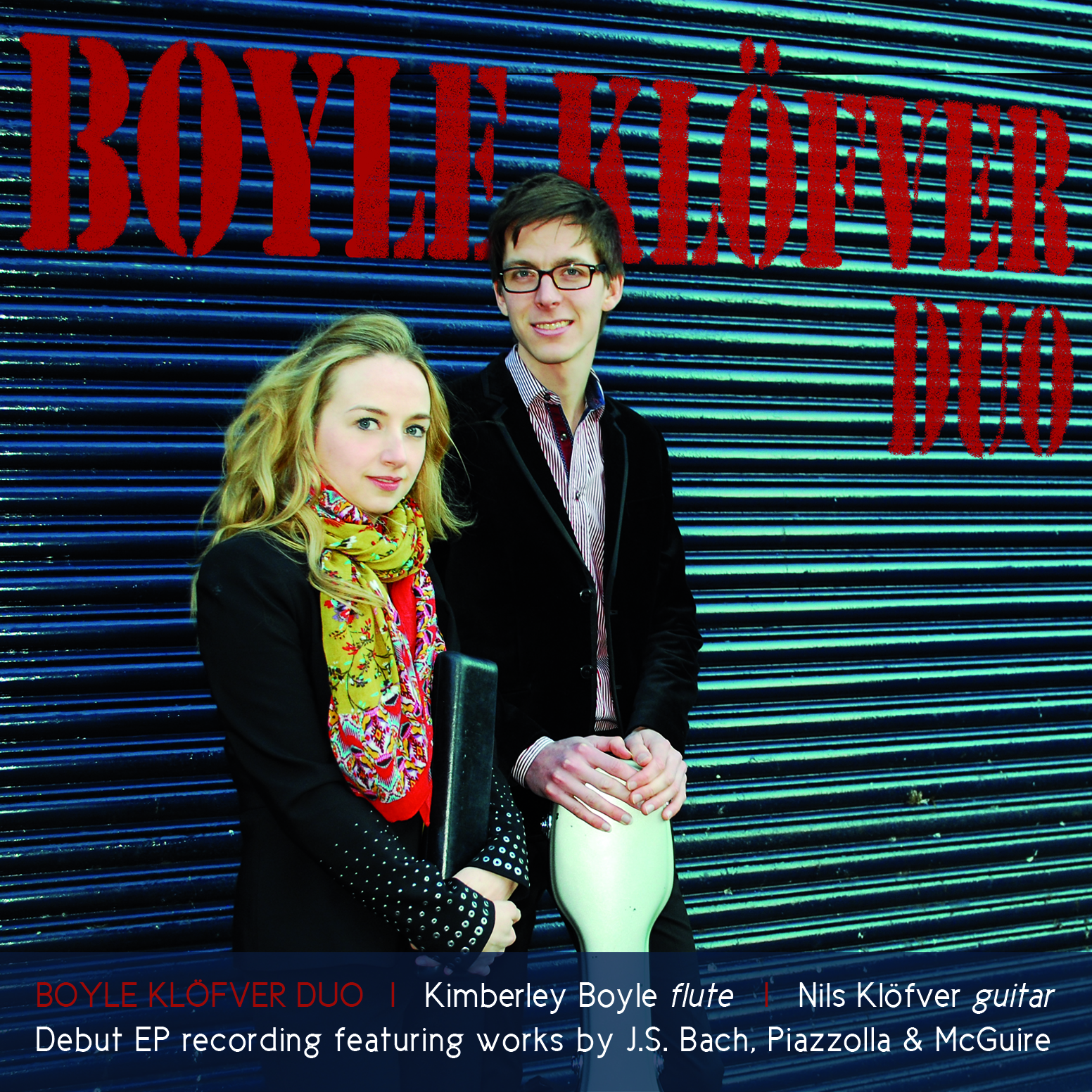 For any enquiries, please contact the duo using the following details.